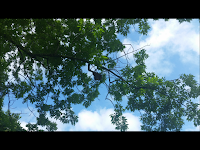 Swarming never gets boring. Such a thrill to witness this remarkably well-choreographed event. I could feel it happening Sunday morning at 11:30 am. Something in my being picked up on a need to run to the window and there they went... off into the sky to land in a grand old ash tree settling precariously, it seemed, on a branch just high enough out of reach for them to wave "Goodbye!"

I knew I had failed to take seriously this robust over-wintered nuc. I was busy working with moving and splitting an over-wintered colony hoping if I piled enough boxes on the nuc all would be well. Now I realized I gave them too much drawn comb. Maybe more foundation frames? We've been relocating onto a recently purchased property where I hoped to contain and control any antics my bees may throw our way, but we were exhausted with all that began to entail. Now this.

Okay, girls, I thought, "Goodby & Goodluck!" Maybe they would be out there in the woods someday as proven survivors, mating with my colonies of the future. 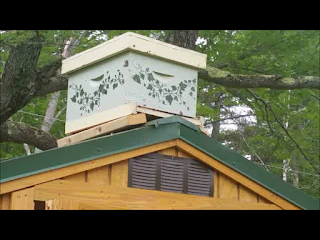 My husband said, "This is a call to action!" He so wanted to have the experience of "catching" a swarm and broke open the hive box storage shed, setting up mock hives all over the property. A ladder appeared. I reluctantly filled in the gaps in his knowledge of honey bee biology recalling tidbits as I could from "Honey Bee Democracy" which resulted in his placing one hive box high off the ground on top of our storage barn.

This land has been an exciting surprise this spring with successional tree and wildflower blooms into one humid, hot, dry summer. My colonies have been so occupied and content despite New Hampshire moving toward a moderate drought situation for most of June, but rain was on its way!

My nuc apparently did not pick up on a weather forecast of several days of thunderstorms moving our way. She spent two full rainy, windy nights in that grand old ash tree.

I spent the 48 hours keeping vigil, sleeplessly imagining climbing on our metal ladder in these summer thunderstorms, the only ladder with a chance of reaching them, pulling the van up under the branches, bravely rescuing my drowning darlings; but deep inside, I really want my colonies to finish what they start and plan for. If I miss my chance to manage their need to swarm, it's on me.

Yes, those bees put a lot of planning into this event. Scouts were out in rain and wind investigating all their family's options for travel to a safe haven, with just the right volume - they pace it out! - and just the right height off the ground - just the right opening - just the right smells. If you haven't read Seeley's "Honey Bee Democracy" this may seem crazy, but knowing all that goes into it I so wanted them to be successful for all their work and sacrifices to leave behind the cozy protection and resources of the parent hive. 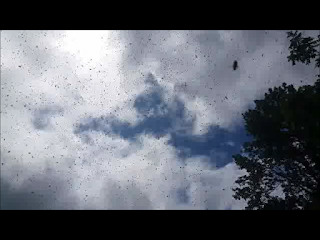 Tuesday, 11 am with shower after shower passing through, I couldn't contain my anxiety and decided if they did not swarm out of that tree by 11:30, by ladder or by van I was getting them down! I went out to watch and it seemed they were suddenly all alive! There was waving, there was flying, there were dances! Dances all moving in the same direction! And then, at 11:16 thunder rolled, wind blew... but we had lift off!

I ducked as they flew overhead and followed them with the only camera that worked in the house, my smartphone. It was... surreal... just amazing... beyond amazing. I was certain they headed for the woods across the street... but WAIT! The hive on top of the barn came into view. They hovered... they settled... they were home! 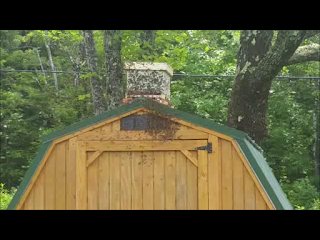 This is the way I want to "catch" every swarm, but understanding the needs of a colony is so important for the beekeeper. Prevention and Control are principles I teach but sometimes we just can't do it all. When we can't we can usually trust the girls to know what to do. They've been doing it for millions of years, after all. My hope is that since they took two days to decide on this location, they'll stay. Once they have brood happening, maybe in five to seven days, I'll move them to the apiary.

Understanding their biology in such situations I believe is the key to honoring their wildness and it sure worked for us this time. Here is a link to Paul Kelly at Guelph University explaining some important principles of managing swarm behavior in honey bees.
Posted by athenasbees at 1:57 PM

Wow. Such an exciting turn of events. I can imagine how fulfilling it must be that they chose the hive on the roof. Exhilarating. Thank you for sharing. It's me, Leslie S.