We set our kayak boots on the porch, full of ocean water, and the bees were all over them. I've read all I can find and there is no real definitive answer as to whether they are supposed to have salt in their diet or no.

During this event, we removed the shoes to the back deck to let them do their thing and the puddles left behind lent us some entertainment. Just when you think you can't be surprised again... Several bees fell on their backs in the water and my husband helped them up with a finger. Then, later, I watched as two bees lined up side by side next to a "drowning" bee in a rescue assist action, waiting for their sister to climb up over them and on to the side of the post. Amazing!

Here's a couple of nice Jewell Weed pictures I took this morning. The bumble bees are more active in our yard than the honey bees. Not sure why, but they were sure outnumbered when those shoes were full of salt water. My husband had an idea that perhaps the salt having absorbed moisture makes it convenient for them to get moisture or carry moisture back to the hive. 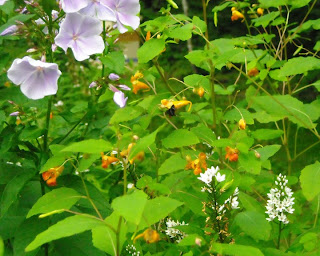 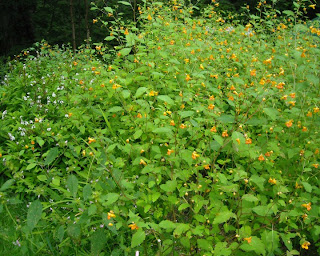 Posted by athenasbees at 2:14 PM No comments:

Posted by athenasbees at 2:21 PM No comments:

They did not need anything...this is the hive that swarmed and they have a nice empty box on top, little or no drawn comb in it. One small and one medium super on top. There was a spider with web between the lid and the homasote board with one unfortunate victim. I killed the spider and cleared out the web. I normally just chase these guys off, but I learned in Hawaii that those big cane spiders would be so determined to return to the scene of the crime that I could not risk having it come back. The ants that invaded this hive's undercover I just let disperse and they did not return; but I believe it gave birth to the swarming instinct that caused this bee colony to do so.

Much of my equipment, since we do not have adequate shelter for storage, had webs that needed to be brushed out.

My Italians....the over wintered hive in their second season....doing great, but it seems we are in a nectar dearth. The girls seem to have taken care of the drones trapped above the queen excluder. They took advantage when I had the super exposed to start dumping dead drones over the side. Must have been twice their weight but they were opportunistic and determined.

I want to get that excluder off, but hoped to do it when I harvested Spring honey....but can't do that now. The goldenrod will be in soon...then I'll do it...I've just had lots of distractions from my beekeeping duties so missed an opportunity there, I fear. The top super had hardly any drawn comb.

Full to the brim so added a medium super. A few earwigs to chase off.

I lit the smoker but again did not see any real reason for having it during any of the inspections. I practiced using the brush on the bees to move them off the edges when I put the hive back together.

Haying Fields: Farmers are busy making hay while the sun shines. The back fields have also been mowed so the only large areas of flowers are the amazing Evening Primrose that have come in to take over what used to be milkweed.
Posted by athenasbees at 10:21 AM No comments: