Back down into the 30's F past couple of weeks.

Took some pictures of what's blooming...just starting in our neck of the woods. A local beekeeper with hives down in Greenland, NH said last week the willows were in bloom and his bees were coming in covered in pollen!

Not so in Wonalancet: 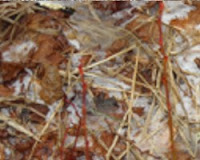 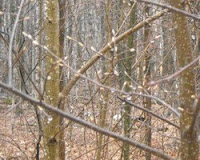 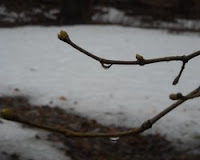 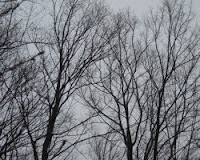 Posted by athenasbees at 8:19 AM No comments:

April 3rd Spring Where Are You? 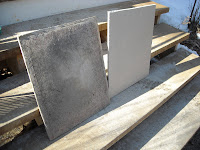 I went back to the hive on April 3rd and replaced the homasote board. It was soaked and there were prints in the snow of a curious dog running up from the road right to the front of the hive. Did this mean that the bees had been flying? There were several bees in the snow. Two or three live bees crawling in the pine needles. I slipped a second patty in but could not see well to notice if they used up the first.

The temps have only been in the 30's and below at night. Today should be about high 40's finally. Just one or two days of low 40's for the bees.

This morning, April 8th, we went by the hive on the way to work and reinforced the solar fence by wrapping a grounding wire around the posts so that if a dog or bear, especially, comes near the snow pack...still 10 inches !! .... will not insulate them from being shocked.

Hoping for low 50's this weekend. Is it too early to reverse the hive bodies? Swamped at work or I'd write more...will eventually about what this means and the strategy.

My friend called to say she can't take two of the nucs we ordered. I think I will take them all. Time I got more into this. Also need to write about the New Hampshire Beekeeper Associations annual spring meeting.
Posted by athenasbees at 11:55 AM No comments: