I went to the Ferncroft ten frame Italians to see if the queen was where she was supposed to be. Success...she is! However, she may need more room. I smoked up and opened the hive down to the Hive deep and the drones were all over me. It was very intimidating even though they can not sting. They were quite anxious about being shut out of the honey supers. Maybe they had been blissfully trapped. I see why a queen excluder should be put on early, before drones hatch. Seems they would just eat all the honey, which I fear they were doing. Other than that, the bees were as gentle as usual. I took a few pictures of them on the wildflowers.

Lavender Hive: It seems pollen is coming in. This may mean I have a queen, but since Wednesday it has been raining so much. Many of these bees are drowning. They come and go when the Italians stay in with their feet up.
Posted by athenasbees at 1:55 PM No comments:

Swarming on a Sunny Afternoon 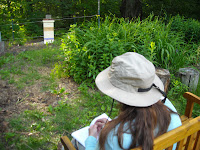 Saturday they began acting agitated at 1 p.m.
I replaced the bag o' syrup with a full one.

Sunday they swarmed at 11 a.m. up into the trees momentarily, then off about 1800 feet as the bee flies, over our woods to the neighbors chimney.

It's ok...a little strange that they would swarm only six weeks after installation...but there are plenty of bees left behind to raise honey stores for the winter. It was not the beautiful experience of my first swarm. These bees seemed agitated all weekend long. Nice of them to swarm while I was home! If I had not seen it I would not have known. I believe they are presently queen-less and the new queen has not yet hatched. So I wait and see. I went into the hive to observe if there was a problem and perhaps robbing going on.

Fellow beekeeper advised to see if the weight of the supers was normal honey-weight or oddly light...means robbing. If queen cells are present, they swarmed. What I did notice was that the queen had not been laying....normal for swarming preparation. I hope I did not damage any unhatched queen cells..but I only thought I saw one.

I walked around enjoying the beautiful day with binoculars and my camera hoping to find where they had gone to. All along they were in our neighbors fireplace! They had called to tell me ..not the bees, the neighbors...while I was snapping pictures all around their yard. Two hours later, I got the message and we rallied the troops...local beekeepers ...to figure out what to do. The thought was they would not choose to stay and sure enough, even while we spoke, they left! I missed it though. I don't know where they went!
Posted by athenasbees at 7:58 AM No comments:

June 14 - Water, Water Everywhere But None To Drink

We found four dead bees from the backyard Lavender hive drowned in the Duck's food bowl. I've been closing up the floor board in our deck to hide the faucet from them as they like to find a water source and then stand guard all day at it.

It is in the low 50's - cold and wet. Several drowned bees on the landing board to the hive.

No activity this morning so I peaked in and found that the pollen patty had turned to mold and all the syrup was gone. No bees on top, but the hive was humming with activity. Maybe just too cold to go out and no nectar flow as the dandelions and lilacs are done. I put in a fresh bag of 1/2 water 1/2 sugar syrup and a small sliver of pollen patty on a fresh inner cover. The hive was dripping wet with moisture so I made sure to put back the homasote board that I took off when the ants invaded.

Tomorrow promises to be 70's state wide and sunny. I'll take a look at all the hives.
---------------
Had to wait until this morning, June 16th, to take a look on Ferncroft at the "sister" 8 frame hive. They also went through all their syrup and the patty was beginning to mold. They had no interest in it. I scraped it off the inner cover and put in a fresh bag o' syrup.
Posted by athenasbees at 1:08 PM No comments:

My three hives have been buzzing along.

Backyard Lavender 8 frame hive:
ANT INVASION! So a colony of ants moved in! I went in to replace the bag of syrup I made that was beginning to show mold. Here is the video:

Italian Over-Wintered Hive: and Ferncroft 8 frame Canadians:
I needed to return to the Italian Ferncroft hive to replace the homasote board that helps absorb moisture, helping the bees fend off hive humidity. This is the hive I did the reversal on May 26th, 10 days earlier, (see video one-blog below) and anticipated that one of the honey supers may be ready to harvest.


I've never harvested honey before so decided on the spot to separate it from the rest of the hive by placing a new super full of new frames and beeswax foundation between it and the over-wintered hive deep that the bees seemed to have full of nectar and were busy drying when last I opened the hive. There were many drones...this is new. I have concerns that this strategy is based solely on the assumption that the queen is in the bottom of the hive....that she survived the upheaval of the hive reversal. Here is the video:

About Drone Bees - from Wikipedia:

Posted by athenasbees at 6:32 AM No comments: