THIS BLOG HAS SHIFTED FOR THE SAKE OF THE NEW APIARY. UPDATES ARE HERE:

A retired couple down the road from us, beekeepers from back in the day, offered to let me use some of their land to stage a new apiary. I hope to start from scratch and try and raise local bees. I'll begin with eight hives in Spring 2014. I'm using 8 frame, cypress hive components from Ross Apiaries in Georgia. The goal in our community is to raise local, winter hearty bees. The trend is to start with the Italian's, "brood laying fools" as Michael Bush phrases it. I currently have had experience with two colonies of these Georgian bees making it through pretty long cold winters up here. 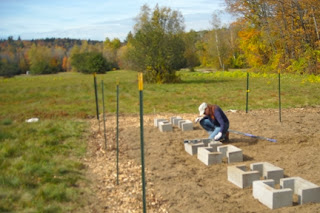 I was going to space them apart more, but one of our state inspectors said it really doesn't matter that much. To keep them from drifting I'm grouping them in twos, spacing them enough apart to work them, and will paint them appropriately so that the bees can see a difference. Eight hives planned for spring. My Rossman shipment just arrived. I thought I'd get them set up, sealed up, ready for the bees as early as I can get them Spring 2014. The hives will have screened bottom boards, slatted racks and cypress bodies for moisture resistant support.

Now that I know a little more about what I'm doing as a beekeeper I hope to have hives survive these smaller units and be able to split them in Spring 2015. I'll be using the medium supers only as brood boxes with one medium on top for growth. That is about as big as they get up here. Then a small super for honey collection. I did not take honey off any of my hives this season. The two that died in April provided me with about 30 lbs so I'll have what I need for my winter cooking. Hopefully, my overwintered hive from 2012 and my hearty colony from this spring will make it. They are both going into winter strong.

Another Re-cap of 2013
One note: All three hives that went into winter survived through early April. The two that died in April I believe had badly mated queens. The third I left alone. I did not feed them. I made a conscious choice about this to see if on their own they could make life up here work for them, and they have. This also despite the bear attack. Out of the two colonies I installed from packages, one is hearty, one completely disappeared two weeks into September. There was healthy worker brood two weeks before, then the hive body was a ghost town. No sign of anything in any of the cells and no dead bees.
Posted by athenasbees at 10:36 AM No comments: