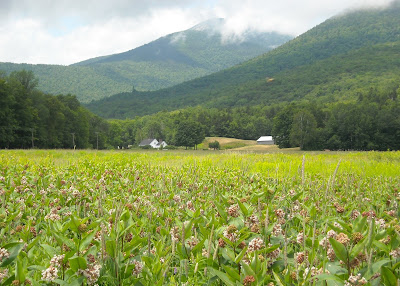 We had a neighborhood meeting last night with the folks farming or owning the open places in Wonalancet. I live in what is designated as "Ferncroft" which is a mile or so long road that reaches into this beautiful mountain Inter-vale. It was a wonderful thing to hear farmers talking among each other and to us about the small farm movement that has taken hold so well here. We buy most all our grocery from our neighbors, including the finest grass fed beef, pork, chicken and lamb. We get farm fresh cream and milk from one that uses the hay along Ferncroft to get his cows through the winter, grass fed.. no grain feeding for those cows.

When I look at this photo I see a miracle of nature. Milkweed came up where nothing else would grow after these fields were treated with strong herbicides back in the 60s or 70s, then the Monarchs came and a wide variety of wild herbs and flowers. The now endangered rusty patch bumble bee is a common sight. Bobolinks nest in the tall grasses. What a response from nature!

But, alas, all the farmers see are weeds and they want them OUT! Milkweed can kill grazing stock and farmer Helen has lost sheep to it. The owner of these fields has long rang plans to turn it into grass and to mow even more often. One farmer said that, yes, there is carnage during the haying season. Nesting birds don't get out of the way... but, he commented, a lot more carnage occurs bringing groceries into the supermarkets than will ever happen out there.

One said anything man does will be a fight against nature. One said none of these birds or butterflies are native here. To say such things, I've pondered, is to say man is not a part of nature. Like the beaver who floods and clears the woods makes way for other species to thrive, so do we when we seek to change the landscape. Nature moves in wherever it can.

Decades from now someone else will work this land or leave it to resilient Nature. I took a long walk out there this morning to shake some of this off and try and savor this beautiful field I live on while I can.
Posted by athenasbees at 10:34 AM 1 comment:

It was great to hear Wendy Booth again after several years and her cool, funny, common sense lecture on beekeeping at the May Winnepasaki Beekeepers meeting in Tuftonboro last week.

There are always these little tidbits of wisdom that remind me of things I thought I had already got down along the way in my own beekeeping adventures. 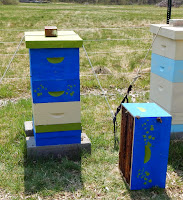 Apple blossom time is on the horizon and then the dandelion flow. Days are climbing, finally, into the 70s with evening in the 40s - 50s but no "peepers" yet so I've been hesitant to go out and do anything too compromising to my hives. Peepers, our little local frogs, overwinter in a sort of stasis and come to life when the evening temps are dependable but the snow thaw this year has been so gradual that I believe the water is still too cold for them.

Several hive were stacked so tall I had to do something. Several were only using the upper entrances so I had to see what was going on and my plan was to go out and do hive reversals, assuming all the clusters were in the upper boxes.

Wendy emphasized to the many beginners there not to go out to perform any task on their hives unless they knew why there were doing it and could ascertain whether the hive they meant to perform it on met all the criteria for the operation. I found myself relieved! Didn't I already know that? I pictured myself out in the apiary doing a marathon of hive reversals on all the hives, but they didn't all need it, of course. 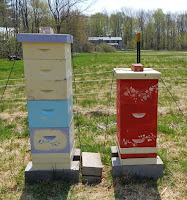 My big concern was the well drawn out honey supers from the old plywood hives I moved last fall. In my exhaustion I felt I must have crammed in 8 long-drawn comb frames into a box that only seven should have filled. I was concerned about having clogged up the flow of the hive, and indeed, I did. Many of the honey frames in the hive supers were clumped together only now being accessed by the bees. To the bee's credit they managed through the winter in spite of this error. Note to self and another reminder from Wendy: If the hive deep has eight frames and the super above seven, is the cluster able to easily navigate up through the hive to access their stores for winter?

Two hives in particular concerned me so I concentrated on those. They still had, on May 10, at least 30 lbs of honey BELOW the cluster! So that being the case, I pulled out the two bottom deeps and the frames with honey, consolidated them into one deep, then placed that deep on top of the cluster. Ta da! hive reversal! One with a good reason for doing so.

Inspecting my Palmer hive now seeing it's second spring after a second long winter, this hive is still a tower but the colony was fully utilizing the entire hive. I did not see one frame bottom with any queen cells, checking the tipped box bottom only. Pollen coming in below, cluster between two supers up top. I decided they'd be fine until a good nectar flow is on, then I'll split them. Palmer 2 the same situation. The other hives are happily using the bottom entrances and bringing pollen in. I decided since they are all in just three boxes each, and I was gaining on three hours in the apiary I'd wait on those hives as well til the nectar flow is on.

A note about smoking bees & cleaning your tools

I'm never sorry about being over prepared going out to the apiary. I pondered whether or not to use smoke anymore. I was deciding to have a season without smoke. I hate it, the bees hate it, and it never seems to be much of a help, but I brought it out to the yard anyway and for one very valuable bee saving moment it was well worth it. I'd broken apart some drone comb strategically placed by the bees between supers. When i went to put back the super a small mountain of bees were covering the broken open larvae and would have been crushed, of course. I just let a little smoke blow over the top and like magic they went down so i could scrape off the comb quite easily and put things back together. I have read that too much scraping like that can upset a colony into absconding so I've refrained unless truly necessary as in this case. 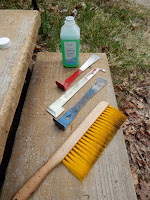 Tool cleaning can go a long way in keeping your bees from needing to be smoked. Smoke's most valuable trick is to mask the smell of alarm pheromones. If you think about it scents or pheromones from the previous hive are all over your tools, and your bee suite, inspection after inspection. I rub my tools down with Winter Green rubbing alcohol. The bees seem to like the smell. Phil Gavin of the Honey Exchange in Portland says he rubs his hands in it when he goes in bare-handed to his hives. Cleaning your tools is especially important if you clean out a dead hive least you take into another hive any virus or bacteria that may played a role in their demise. Nice to be a beekeeper again. Six months of winter is almost as hard on maintaining my skill as it is on the bees... well, ok, not quite that hard...

Posted by athenasbees at 11:59 AM No comments: 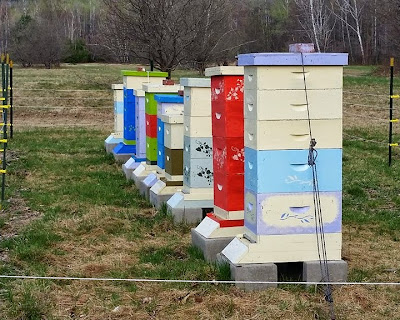 Posted by athenasbees at 1:24 PM No comments: