If you have ever done a cut out from a recent swarm you've experienced how very soft and fragile that beautiful, white-white beeswax they started building can be. The same holds true for wax drawn by the young bees on new foundation.

Everyone is talking honey harvest this summer, even the 1st season beekeepers. Normally we advise not to pull honey the 1st season. Up here in our northern climate the blooms stop in early October, then nothing happens until late May, but this year in late July we still have the fall nectar flow to look forward to and the hives are bursting.

Remember that adding "space" means adding drawn comb. One excellent way to do this or at least to encourage bees up into a new super of foundation is to spin out some honey and add those frames back into the new super. I'll usually space new foundation every other one around the spun out honey combs.


If you only have newly drawn comb this poses some challenges. The wax is so very soft that even wired foundation can blow out in a hand extractor. The honey is just too heavy to be moved around, 1st from hive to work area, then uncapping procedure, and finally lifted and placed into the extractor.

By the time the spinning begins the comb can easily fall apart. 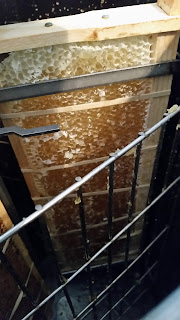 So choose second season frames if you can. They almost never fall apart. For the new wax I have found rubber-banding them works very well. 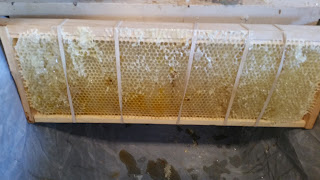 If you need help extracting honey and are local to Center Ossipee, follow this link or come by the shop to talk about it. 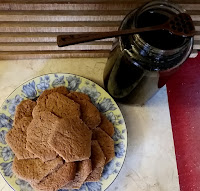 I have always loved this "brown sugar" of the honey varieties here in New England. Dark, rich, but mildly sweet knotweed honey. Very high in the anti-oxidant Resveratrol. Some research suggest it helps the bees combat nosema disease as a fall nectar source. Of course, it is invasive, and there are very aggressive campaigns to eradicate it.

Nonetheless, last Saturday some beekeepers came up to the kitchen and we spun about 33 lbs out of just nine medium frames, but my personal supply came from Crystals Bees down in Massachusetts. The bees love it and it is amazing to eat, cook with and known to produce a wonderful mead. I'll find that out tomorrow, or at least in 3 to six weeks, after our class in mead making at the shop in Center Ossipee. James Lindenschmidt of Bardicbrews.net will be teaching The Lore & Craft of Mead from 2 to 4 on Sunday, April 10. In the mean time, let's make cookies!

Ginger Knotweed Honey Cookies
Sift together:
Cream:
Plop dough into a sheet of plastic wrap and roll into a rope for chilling. 1/2 hr in the freezer will do. Cut into slices, roll in organic sugar crystals - white or brown - and bake on a greased cookie sheet at 400 degrees for 12 minutes.

Quoting wikipedia: "Japanese knotweed flowers are valued by some beekeepers as an important source of nectar for honeybees, at a time of year when little else is flowering. Japanese knotweed yields a monofloral honey, usually called bamboo honey by northeastern U.S. beekeepers, like a mild-flavored version of buckwheat honey"

Posted by athenasbees at 4:40 PM No comments:

What is a Beehive & Where Do Its Bees Come From?


Getting Bees From Commercial Sources: Commercial beekeeping companies sell "packages" of bees sourced from commercial beekeepers employed to travel with their bees around the country for the purpose of pollinating large orchards and farms.

At the end of the pollination season the colonies are shook together and systematically funneled into screened boxes. A queen, bred and mated by a Queen Bee supplier, is affixed to the screened box with the hope the confused honey bees will embrace her as their mother and form a bond as a colony in a common goal to survive. Statistically, with all the modern challenges honey bees are facing today, this is successful about 50% of the time or less. Packages are a cheap, efficient way to acquire bees but the price just in the past six years has gone from around $80 up to about $135.

A beekeeper obtaining bees by the package through the mail or by personal pick up, is willing to accept the risk of failure and will be taking extra steps to insure the bees are treated for diseases and mites acquired from their travels. BUT the risk is not limited to the purchaser. Neighboring beekeepers could be impacted by unhealthy bees brought in from the commercial bee industry. One recently discovered issue is the prevalence of infertile drone populations. A beekeeper working hard to breed northern, disease resistant bees would lose a colony queened by any mating with these drones. A queen is only as good as the drones she mates with. PLEASE DO BUY BEES RESPONSIBLY.

Always try to insure:
1. Honey bees in the screened packages are showing some solidarity by clinging to each other and the queen before you leave the pick up place with them.
2. You know where the queen is from. This will determine the resulting type of bees you will keep.
3. Bees are released into the prepared hive over drawn comb with a supply of feed or that you are prepared to feed the bees a sugar-syrup mix in the hope the bees will be stimulated into drawing out their own comb on new foundation. The Queen needs cells to lay in. The bees need cells to store pollen & nectar in.
4. Normally, no products will be harvested from the package bee colony the first year.

Getting Bees From Other Beekeepers: Obtaining honey bees from other beekeepers that raise bees in the same climate as the buyer is the preferred method for obtaining bees with the greatest chance for success. These honey bees are "split" off from a strong hive through the removal of two frames of brood and two frames of honey and pollen. A queen is either raised by the bees themselves from among the brood of the split or supplied by a Queen Breeder. Honey bees sold in this manner are referred to as "Nucs" or Nucleus colonies. Nucleus colonies run about $180 to over $200 each.


Always ask two vital questions:
1. Did the nucleus colony over-winter or was it made up in the spring?
2. Where is the queen from?
Did she over-winter with the colony or is she new? If you live in the north, make sure the queen is from a northern breeder. Often, nucleus colonies are just a package of bees put into a box with drawn comb by the seller in order to make the higher price in exchange for this service; but always ask.

Getting Honey Bees In The Wild: A colony that has escaped into the "wild" - housing itself in a tree or other natural cavity is called "feral". A feral colony should be left alone as they are now being considered the last hope of the honey bee species. Extraction of bees from an established feral location has a high percentage of queen loss. The bees are only as valuable as their queen.
Swarms: A "swarm" of bees that escape a beekeeper or that house themselves in a building etc, can be retrieved and put into a hive. Some beekeeping clubs and state beekeeping organizations have a "swarm hotline" in the hope that anyone witnessing a swarm of bees will call for its removal. These are "free bees" to the skilled beekeeper and there is much written on methods for "catching" a swarm. The colony may be easily housed into a suitable hive and most swarms prove to be very productive. 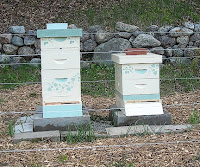 A beehive is the domicile where a beekeeper keeps their bees. A beehive may also refer to a hollow in the tree where a wild honey bee colony has established a home.
A honey bee colony, on the other hand, is a super-organism made up of a queen and her children. It helps when discussing all things "bee" to use the proper terms and not confuse "hive" or house with "colony" or the family that lives in the house.

Beekeepers want the colony to survive and produce hive products like honey, bee pollen and wax. The hive must be well planned with the climate and environmental challenges the bees will be facing kept in mind for this effort to be successful. There are a variety of styles of beehives unique to different countries that work especially well for their varied climates. 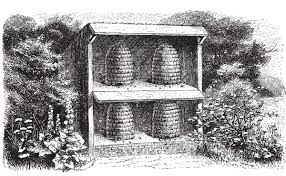 The traditional Skep hive used anciently is no longer appropriate as harvesting products from it require the demise of the colony. (See a great YouTube of an old skep operation here)

In the warm climate of Africa, for instance, the basic Log Hive is giving way to the more modern manageable Top Bar Hive. In cold and damp environments like England the WBC double walled hive is popular.

The standard in the U.S.A. is referred to as a Langstroth Hive. The design is a modern invention that allows a beekeeper to manage a colony of bees with the least amount of disruption to their survival routines. It consists of a brood box and expansion boxes called "supers". All the boxes contain removable frames where the bees accommodate the management of their colony by using the frames to build their comb, raise their young, and store their pollen & honey. The construction of a Langstroth Hive takes into consideration something called "bee space" or a margin of space between combs and between combs and the hive walls that bees maintain naturally in order to maximize colony efficiency. Materials used in the construction of a hive also must be non-toxic to insure success.

Posted by Unknown at 7:24 AM No comments: