Video: Drying out the bees

Here is a video we took of the first day of spring.

Posted by athenasbees at 2:48 PM No comments: 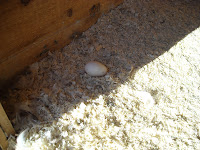 First day of spring was 47 degrees...but those temps below have been a dream this week...in the teens again!

Bless Libby's heart, she laid an egg on the first day of spring!

Opened the hive and inserted a pollen patty. The bees were moving up near the center opening of the inner cover. That homasote board really worked. Lots of moisture but the pine needles for the most part are dry.
Posted by athenasbees at 2:38 PM No comments: 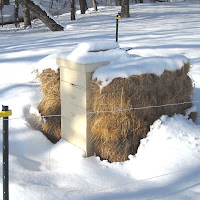 Heavy snow yesterday! About six inches or more! I was hoping the melt would make it a nice day to open the hive. Neighbor out across the way said he saw a dead bee on his porch a few days ago. Went out to clean the snow away....still biding my time.

Posted by athenasbees at 1:53 PM No comments:

I'm reading two books by beekeepers just south of here. My dilemma is knowing how long I can wait to take a peek and most especially, slip a pollen patty into the hive. The books say end of February but we are about a month behind Boston for the oncoming of Spring. We are in a very normal, gradual warm up pattern. The sap is flowing, but bees can hardly move at below 57 degrees F. My hope is that as temps come up above freezing the bees start to move as a group to areas of the hive with more food. I don't want to do anything to trigger a foraging response, least they take off and can't get back resulting in last spring's catastrophe.

Here are the temps I'm dealing with as well as 1 foot of snow pack:
Posted by athenasbees at 11:31 AM No comments:

All The Yukky Stuff About Beekeeping 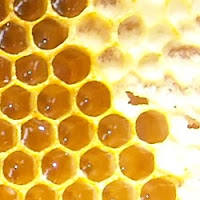 I look forward to my bee magazines like teens used to look forward to the next issue of Tiger Beat. Do they still? I confess to having skipped over all the way- too-many articles on disease looking for all the fun stuff: building the hive, playing with wax foundations and deciding what materials to use; harvesting honey and bee behavior in their roles as worker, nurse, forager, queen, drone...fascinating.

But then my first bees disappeared in March 2010...and as I've written here, it was not sudden, just swift. Seeing those last remaining bees sitting on top of the frames as pictured below, was so poignant that all the unpleasantness of bee disease drained away while concern and determination flooded in. I began to dig out the old issues and read, read, read. 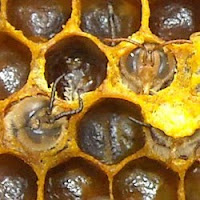 Taking apart the hive and seeing the evidenced desolation of this once teaming metropolis was not yukky....it was an inspiration filling me with wonder and energy.

Even the little baby bees frozen mid cell as their efforts to be born met with the chill of an absent family; not there to protect, feed and warm them - demonstrated this colony's amazing courage in pain and uncertainty. 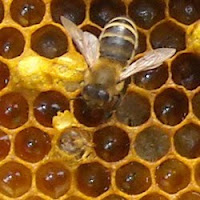 This lone bee, the only one left on the frame, scurries to each cell in a futile striving to be of help. 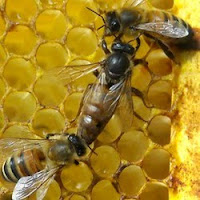 The Queen was still laying although there were only four bees at most able to perform all the duties of attendants. Not enough to feed and enclose the vulnerable eggs and larvae. Pollen stores raging in color, beautifully packed by their long gone sisters; honey neatly capped.

The very absence of the majority of the bees demonstrating remarkable feats of self-sacrifice.

Part of a silly poem, a snippet we see of life as a bee:

"On the front porch, alone on the shelf
Was a quivering bee, all by herself.

She was cleaning house; clearing the floor.
The husk of a sister she dragged out the door....

Now Mr. Researcher, I want you to say
What motivated that bee, to act that-a-way?

The warmth of the cluster she left to the rear
And braving the 20's came out in the air.

But she worked till the end without a complaint
What made her do that, work like a saint?"
Posted by athenasbees at 7:15 AM No comments:

I'm beginning to wrap my mind around the Eight Frame Hive. This last year my bees had the best chance to fill their Ten Frame Hive and could not. Lots of bees, but still the outside frames were hardly touched.

I have not yet taken a look in my hive that has over-wintered out on our country road. The night-time temps are in the teens still and the days have just begun a gradual warm up into the low 30's. It is March 9th.
Posted by athenasbees at 7:05 AM No comments: