Long, Mild Autumns in the Northeast… Why Fall Has Been My Bees' Most Dangerous Time of Year


We are learning new facts about bees all the time but this information from past published research on honey bees has served me well. Corrections always welcome:

#1 - AIR TEMPERATURE OUTSIDE OF HIVE: 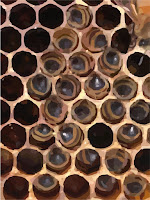 The death of honey bee foragers from cold and mowing practices in the country often leads to failed clustering efforts. This sets colonies up for attack from the high wasp populations - and with low native insect populations becoming the norm, wasps are all the more a threat. (For mowing impacts on colony loss see "Apimondia Istanbul - Promoting Bee Friendly Farming Methods - Walter Haefeker".

In my experience, bees protecting brood may not break clusters to protect food reserves from being robbed. Once the adult population has dwindled out the nurse bees stand little if any chance of compensating for their loss or surviving into winter. Often all that is left of a cluster after such events are the queen and a few attendants. To read more on this pheromone driven phenomenon: See Randy Oliver's "Old Bees, Cold Bees, No Bees" Part 1 and Part II."

What can the beekeeper do?
Ideal temperature-driven behaviors when the nectar and pollen flow are over:
Thank you for caring enough about your bees to spend time reading such information as your fellow beekeepers can share in blogs. Despite the abundance of information on the web, it has always been the tradition of beekeepers to teach this craft by carefully sharing what they think they've learned when interacting with, and especially keeping alive in our climate, these brilliant and ancient, productive animals.

When asked many curious questions, I must have appeared vague about my so-called "treatment-free" practices, but there should be a round table about that subject sometime at bee schools because, like most management plans, it is usually unique to the beekeeper, their bees & their environment.

Someday, I hope very soon, we can stop talking about - and arguing about - varroa and celebrate instead the amazing honey bee and all the wonderful gifts evolution has brought about in her.

I wanted to be a beekeeper to take advantage of a colony's willingness to let us lean in close and interact with their wild natures. All I've ever sought to do is honor that wildness and enjoy the privilege. 12 seasons in, continually fascinated, never bored, and truly love being a part of beekeeping culture.
Posted by athenasbees at 8:40 AM No comments:

by Athena Contus, Athena’s Bees – April 2017
This is dealt with in many places on the web, but I'm just hoping to simplify it here for my students with some important links.

There are two types of pheromones: releaser and primer pheromones.

Releaser pheromones are odors that are fast-acting and behavior-changing, like the smell a bee leaves as a mark on a threat when it is alarmed.

Primer pheromones function much differently: they induce delayed, behavioral or psychological responses. Female worker bees do not lay eggs because they are under the spell of a primer pheromone released by the queen.

The other alarm pheromone is released by the mandibular glands and consists of 2-heptanone, which is also a highly volatile substance. This compound has been found to anesthetize some intruding insects for about nine minutes.

Nasonov pheromone is emitted by the worker bees and used for orientation and recruitment.

Prevents worker bees from bearing offspring in a colony that still has developing young. Both larvae and pupae emit a "brood recognition" pheromone. This inhibits ovarian development in worker bees and helps nurse bees distinguish worker larvae from drone larvae and pupae.

Drones produce a pheromone that attracts other flying drones to promote drone aggregations at sites suitable for mating with virgin queens.

This pheromone is left by bees when they walk and is useful in enhancing Nasonov pheromones in searching for nectar.

In the queen, it is an oily secretion of the queen's tarsal glands that is deposited on the comb as she walks across it. This inhibits queen cell construction (thereby inhibiting swarming), and its production diminishes as the queen ages.

Ethyl oleate is released by older forager bees to slow the maturing of nurse bees. This primer pheromone acts as a distributed regulator to keep the ratio of nurse bees to forager bees in the balance that is most beneficial to the hive. For my beekeeping this has proven to have a great deal of impact on colonies going into winter. If fields are mowed when possibly two-thirds of my bees are out there foraging, they will be mowed down, returning to the hive in such small numbers a domino effect causes the dwindling phenomenon. See Randy Oliver's "Old Bees, Cold Bees, No Bees". Randy oddly does not mention mowing as a reason for foragers not making it home, but this is what I see and it was addressed at the Apimondia International Beekeeping Conference in Istanbul, 2017, Promoting Bee Friendly Farming Methods - Walter Haefeker
Posted by athenasbees at 1:55 PM 1 comment:

A common sight on a hive landing board is a little bee or several with their little bee butts in the air.

This is where the nasonov gland is located. As the bees fan it with their wings, it gives off a smell similar to lemongrass.

It says to the homeward bound bee:

Another common site is a small battalion of young bees hovering & flying in short spirts, while facing the hive. The guard bees hustle them out to practice these “orientation flights” whenever a safe window of opportunity presents itself.

Honey Bees are excellent navigators – even on a cloudy day they utilize the polarized light of the sun to get around; many colony dynamics come into play for success.

Navigating serves two purposes for the honey bee: Do the job – Get home.

The beekeeper needs to appreciate the following facts about honey bees & movement:

•    Moving a hive is very problematic because honey bees are very location specific. The landing board they leave from is in the only place they know to return to whether it is still there or not.

•    If during the day a beekeeper moves a beehive that has flying foragers, those foragers will come back to the base the hive sat on. It is the only location for “home” they have oriented to. Methods for moving hives must be carefully thought out by the beekeeper. Many are discussed in online beekeeper venues.

•    Bees cannot navigate without the polarized light of the sun so, unlike bumble bees, do not do well in a greenhouse or any house but their own.

•    The honey bee’s day is done at dusk. They cannot navigate in the dark. Night lights confuse them.

•    If trapped in a house or a car they will go immediately to a window toward the outside light trying to get home.

•    Bees may drift to other hives by mistake if they can’t recognize the home hive from the others in the apiary. If they have food with them they are welcome; if not, they are expelled & unless they can smell the difference between their home and the neighboring hive, they are lost.

•    In winter honey bees can be confused by a wrapped up hive when coming back from voiding waste. They often try and find their way under winter wrappings in vain. They can become exhausted, dying in the snow while looking for home.

•    There are no nasonov fanners on the landing board in winter. Some beekeepers do not wrap the front of the hive to avoid confusing the bees or concealing its uniqueness in the apiary.

We didn't get to this subject in our last club Bee School. This subject is often seldom addressed in books and lectures as well.
Posted by athenasbees at 1:38 PM No comments: 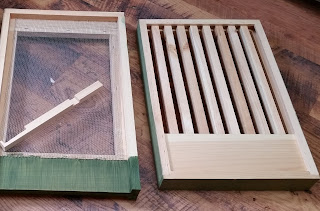 Another winter and new beekeepers in Bee School 2019... Here are some things worth mentioning with a link to a past article or two...

Slatted racks were designed with great insights into northern honey bee behaviors. The book we are using for bee school this season reveals some confusion about what Slatted Racks are most useful for:

Painting a beehive is fairly straight forward:
How To Paint:

The hive parts that touch each other must be paint free. Paint only the outside surfaces for weather proofing the wood. The bees will propolis the insides. The landing board may be completely painted as it does not touch the bees nor need to be removed during an inspection.

Read more detail at this link.

What to use:  Exterior Paint, Latex. The photos above are with a weatherproofing stain, VOC less than 100. Drying time well over a few weeks before installing bees.
In our northern climate I make sure I can use it in cold weather.
What does this mean? Colors look different and they are attracted to our Purple, Violet, then Blue in that order. Red doesn't work for them. White looks bluish-green to them.
Posted by athenasbees at 10:45 AM No comments: