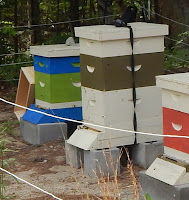 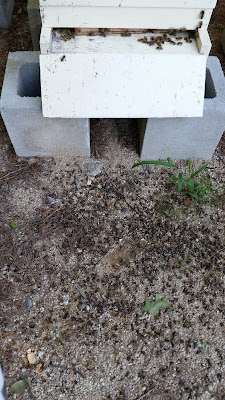 My over-wintered swarm from last season, "The Shed Bee Gals" now relocated to my teaching apiary at work, have survived yet another abusive incident.

Large, black bald face wasps attacked. I saw remainders of two wasp corps on the inner cover during inspection, then this, photo right...

...headless hundreds of my girls!  Wasp want what is in the thorax, especially. One lone fat baldfaced wasp crawled among them, recklessly turning each over looking for a last bite. Quite the horror show. This photo, right, also shows my kick-wasp-butt girls trying to propolize a breach in the entrance. I had forgotten about replacing this piece of wood with a more adequate entrance reducer.

Photo left: Wasp butts, adequately kicked... Not sure what the girls did with the rest of them... Despite losses, they are strong going into fall.

I will also have to change the hive base to a chimney stone so that during winter cold breezes do not blow directly into the hive. 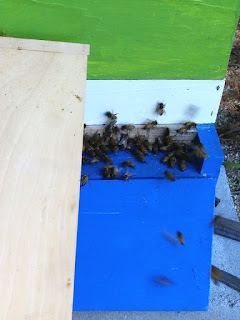 ROBBING - This time of year also poses a problem with robbing, so all entrance reducers are going on. An innocent inspection is all it takes to set everyone off.

In an apiary with multiple hives - I have four here at work - it is recommended to take the covers off all the hives so that the bees will be distracted as the strongest will always rob from the weakest, even if the weakest is a good sized hive.

My Minnesota Hygienic bees, right, are actually a little too much on the small side. This summer a raccoon toppled them over, but they rallied. Then here, photo right, they fall victim to a barrage of intruders after I revealed their honey stores during an effort to replace some undrawn foundation with extracted frames still dripping with honey.

I could not get the entrance reducer changed over fast enough. I fear what good honey they had going for them was significantly depleted before I realized what was happening. Robbing screens are made for such events. You can also bring a wet towel out with you and throw it over the hive. The bees whose home it is will know how to get in and out.

In this case, closing the bottom entrance altogether and pushing the cover forward to reveal the upper entrance notch in the inner cover would have been the right move. I awkwardly blocked the entrance with a nuc lid that was handy.

Learning to think on your feet as a beekeeper is one of the most valuable talents you can master. It was during the robbing incident that I discovered the dead bees in front of their neighbor, Shed Bee Gals, hive. Normally I make surveying the hive entrances a prelude to any inspection, but it was late in the day and I was tired. Good reminder for keeping good habits.