A wonderful reminder of why we keep bees...

Posted by athenasbees at 1:59 PM No comments:

Looking Back on lost hive

I looked at my photos from November 2011 and the evidence of sugar fondant I provided the hive that died this February 2012. Could they have starved? I fed in November and their were five frames of honey in the hive. Perhaps they fed themselves into a corner...but I think the queen must have died.

Perhaps I let them down, but their work will not go to waste. The comb fortifications they labored all last season to build will start another hive off with a boost in the spring; the beautifully molded octagon cells will house brood from a new queen, nectar from a fresh harvest, pollen for future generations…and their healing honey has already flowed on our home made bread. Normally you don't reuse comb and honey from a dead hive, but I hear this advise and see my neighbor beekeeper use nothing but and her hives thrive...so I'll learn for my self this year.

Posted by athenasbees at 7:09 AM No comments:

"No idle, vain, voluptuous life,
Nor one of useless toil and strife,
The busy creature led;
Active, loyal, clever, brave,
A patriot free, not crouching slave,
She earned her daily bread."

We still have six inches of ice and snow so I've put off checking on the hives until Feb 16th. I've lost at least one: The 8 frame Canadians, Fuchsia hive on Ferncroft. They were in a nest up at the top on several frames with honey stored here and there on at least five frames. No wing deformities. All bees very furry and complete specimens of healthy bees...just all dead to the last one. 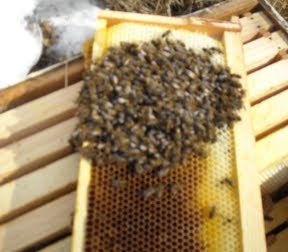 No brood or evidence of a laying queen. She may have normally started laying in late January. These are cold weather bees so I have to think that the queen died and they muddled through this far into winter alone. 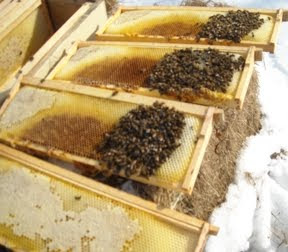 The other Canadian hive in my backyard seems fine. Also 8 frames, also at the top and feeding on a new batch of fondant.

The Italians are no where to be seen on top but I believe I heard them down in there.

No evidence of mice except a little path made to clean up the bees at the entrance of the mouse guard. Not bad as with the ice build up on the front of the hives this has opened up some circulating air for them. Considering we are in an area heavily populated by field vermin of every kind, and the hives themselves are packed around with hay bails...I'd say that hardware cloth mouse guard is doing its job. 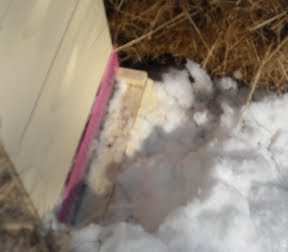 I didn't take a picture of the mouse path....this is after I chipped the snow away.

All hives were dry on top...the pine needles stapled into burlap on the homasote board did their job.
Posted by athenasbees at 6:23 AM No comments:

I've been enjoying the book "The Honey Trail" by Grace Pundyk, an Australian author who traveled around the world looking for the source of the honey on our supermarket shelves. She has a way of taking you right along with her from the jungles of Borneo to a boardroom in China...it is fascinating informative reading. I had to stop reading now and then to give in to the feeling I should be joining her in a spoonful of honey or a cup of honey sweetened tea along the way.

A question was posted here about where I had learned that High Fructose Corn Syrup is bad for bees. HFC is spoken about in this book as a byproduct of GM or Genetically Modified mono crops, in this case Corn. The systemic pesticides in GM corn not only effects the honey bee that forages on it, but also carries over into HFC products. Commercial beekeepers routinely use HFC to feed bees. It is one of the highest probable causes of Honey Bee troubles. The largest colony losses are found in bees foraging on GM crops. Of course, there are many man made factors influencing the demise of honey bees around the world. I had no idea what big business Honey is. Pundyk does a great job of explaining it all to the honey lover in all of us.

The Honey Trail by Grace Pundyk 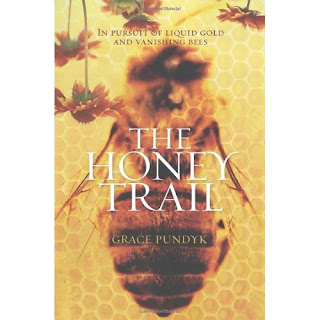 Posted by athenasbees at 9:30 AM No comments: