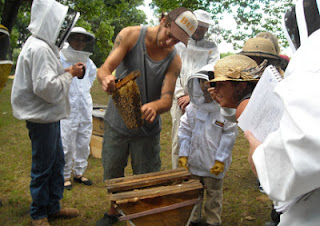 I went with a beekeeping-friend to an Organic Beekeeping workshop… in Leominster, Massachusetts. It was quite something and we stayed in a nice hotel but for some reason I couldn’t wait to get home. Long drive to Massachusetts and a very intense workshop, but very loosely organized. It was hard to tell who was in charge or what the agenda was with no handouts, however they did an amazing job of pulling together an eclectic group of beekeepers who had gone treatment free and were having no big issues with mites or bee disease. I’ve been to every seminar NH has had in my four years as a BK but never heard such things spoken about the way they did. It was remarkably refreshing. It turns out Beekeeping has become a very controversial subject and most of what I have learned from NHBA has been a different view. The conference went all week but we could only do this workshop and it is possible that ducking in on this two day part of the event in the middle of the week is why we felt so out of the loop on what was happening.

It was information overload – so new and intense - and I have a whole new direction to go to in my reading, but it is closer to my heart and instinct than what I’ve been taught. Like, why do folks smoke the heck out of their bees? I learned I usually don’t need to at all only because I could never get the stupid thing lit! The bees were always so gentle anyway that I’ve gotten this far without. It just helps to sort of move them out of the way gently so you don’t crush them when putting the hive back together. None of these guys blow smoke in their hives like I’ve been taught. I guess the more aggressive bees in the south may be another story.

People came from Montana, Colorado, NY. There was even a child beekeeper…very cute. That was another thing…the attendees were very interesting and had enough experience to ask great questions. No question was sidelined, but thoroughly explored, unlike my NHBA meetings that avoid controversial subjects, like not using any chemicals at all, even miticides for varroa or fungicides on their crops, or herbicides through our state forest where lumbering is happening. At those meetings a state expert told us to register our hives so we’ll be notified when a new insect was requiring a new chemical spray. When asked why spray when even a non-scientist can tell you it is not a long term solution – the questioner was treated like an enemy to farmers. All these things contaminate honey and wax and damage or kill the intestinal microbes in the bees and corrupt their ability to function properly and feed the new baby bees nutritiously – not to mention creating an increased inability to dependably pollinate our crops, if at all.

Four experts conducted our workshop and all of them let their bees draw their own comb rather than supply them with a base of wax:

From New Mexico's Les Crowder, Michael Bush, Nebraska author …AN ACTIVE, EXPERIENCED NORTHERN CLIMATE BEEKEEPER AT LAST! Eye opening logical methods to keeping bees free of pesticides and chemicals – turns out the starter wax we all buy has been testing positive for many other chemicals. Yikes! He’s written some marvelous books, but offers the info all for free on his website at http://www.bushfarms.com. Sam Comfort of NY and Florida; and Dean Stiglitz and Laurie Herboldsheimer of Massachusetts.

Thanks to their example and others on the case, there is hope for the honey bee and the future of our lands to continue to produce our valuable foods.

The Practical Beekeeper by Michael Bush

Posted by athenasbees at 1:41 PM No comments:

July 1st, Sunday, I spent the day preparing all I would need to add a super on each of the hives. Shallows, except for a medium 10 frame on my backyard hive that is much deserving. Funny, they are in the most shade of all and seem to be the most robust hive.

I wrote in my bee journal the details but basically it was just routine, with this exception: The stream-side hive was creating some sort of rope of bees from the top of the hive lid, through the empty shallow I use for placing feed, and attaching themselves to the inner cover. When I took off the lid, they dropped in a plop to the grass. I did not see any evidence of the queen and they had not built up any wax on the lid...however, when I went back to pick up the hive pieces I'd left out so the bees could find their own way home, there was one single bee left and actually stuck with propolis to the lid! Was this on purpose? What were they doing? They almost looked like a swarm but too small. It took a long time for them to get out of the grass and move on. - I realize now after going to the organic beekeeping conference that the bees were building their own comb. There was a natural start to this on the inner cover at the end of the rope and pollen was already stored in it. They were telling me it was time for a super. In the future I will try letting them draw their own comb.

The middle hive was again not very robust. I could have left the super off but a nectar flow is on....none of the hives ate the syrup I left a few days ago...and just thought I'd error on the prudent side. I'll go in and take a good look in a week or two.
Posted by athenasbees at 12:49 PM No comments: