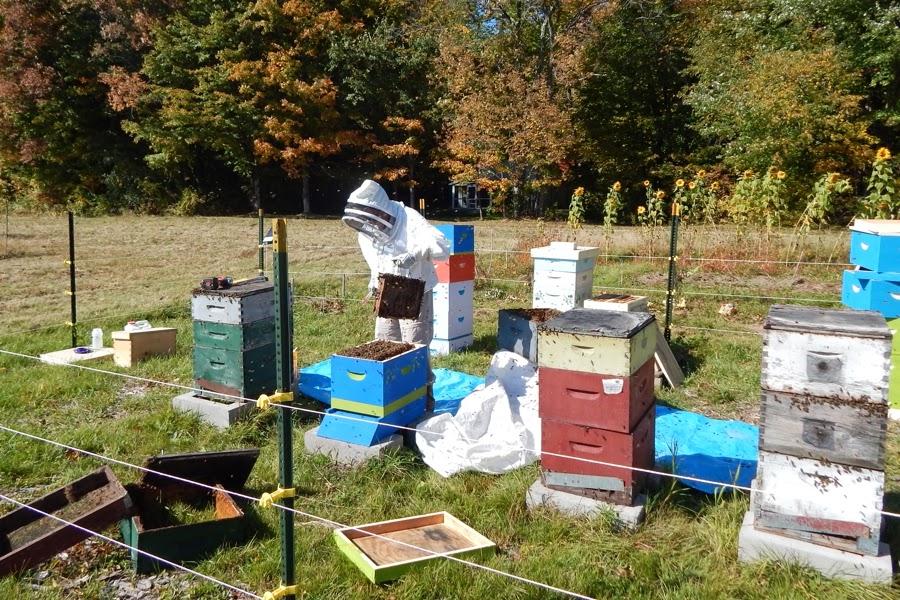 Predicted daytime temps in the 70s and 80s did not disappoint. I got everything ready for the big move: Six colonies in old ten frame hives into six new 8 frame hives. My color scheme was all over the place despite my efforts to go all Martha Stewart on them. Still, the neighborhood is looking up.

I was able to deter some robbing by keeping the hives covered with a light weight white plastic over the boxes and came up with an efficient routine:

Old hive: most were deeps with the bottom box empty. Heavy honey stores were in the uppermost boxes. No brood in four and just a frame each of capped brood in two. I took them off in reverse order, but thought it best to load the middle deeps into the lower deep on the new hive. I substituted the empty combs in the bottom deeps on the old hives in the transfer with the excess honey combs from the middle on the old hive. Top remained the top. Excesses of all frames were allowed to be robbed away from the hive by placing them in two nuc boxes. When I placed the new bases with the first deep on the hive stones, I shook a little lemon grass scent inside.

Their beekeeper up north let them draw out the honey supers, nine frames in a ten frame box. These were really thick combs and so I ended up putting seven in my eight frame boxes. The first hive I did I was a little overwhelmed with the weight of the hive components and did not think clearly about jamming them together. They seem OK, though. All hives appear to be quite robust.

It was a shame to see all their hard work on some of these hives go for naught; but it was all for the good of the apiary... better than feeding them sugar. I did put 2:1 sugar syrup in a boardman feeder on top of the inner covers when I buttoned them up just in case the competition at the nuc's comb was too much for some of the hives. All looked very strong, however.

I decided not to insulate yet, but did add homosote board under the lids. Had to use some painter's tape to cover thin openings between misfit boxes - seeing a lot of that these days with the cypress hives I buy from Rossman - but should have used some of the propolis as it was warm enough to be mailable. (someone from Georgia told me they heard that cypress is in short supply and younger trees are being used that have not cured properly. I used to order them from Brushy Mountain but on one occasion a delay had me talking to them and I came to discover that they get their hives from Rossman. Not sure where to get my hives next year but won't risk Rossman's again if the cypress is not an advantage after all.)


Posted by athenasbees at 9:15 AM No comments:

I have spent the last few weeks trying to acquire some hives from a former commercial beekeeper up near the Canada border. Although I'm thrilled I finally have them, the lateness of the season and the incredibly poor shape of the hives requires some careful decision making.

I attempted to move the largest, hole riddled one into a new eight frame Langstroth hive. The robbing was insane as the fields had been prematurely mowed and the cold weather was setting in with air temps barely rising above 57F and then just for an hour or two. The hive must have weighed half by the time I got it put back together again; however, they are all safe and sound or so I hope.

After reading through pages and pages at Beesource forums I believe I will stick with what I've learned to do in the past and keep my winter set up. I thought I might go ahead and feed for fall... but worry about stimulative feeding as described by Michael Bush. I've seen this happen where the bees are fooled into thinking a nectar flow is on and that bolt into forage mode robs the hive of all the adults needed to keep the hive warm. Also, the danger they will pack the comb full and their winter movement options be restricted. 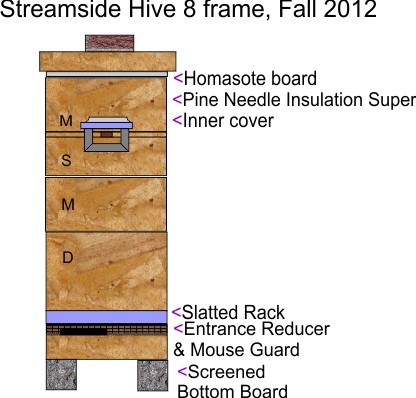 Except since I have so many hives and because one of my hives was killed by wasps last fall I insist on a small entrance at the bottom. Instead of hardware cloth, a nail in front of the small opening, to keep the mice out - who are already making plans collecting the dried mowed grass and stashing it under the hives! - Thanks again, mowers...sigh -


So now I wait for a warm day. The weather changes almost by the hour. Weatherunderground has a very helpful graph that shows probable wind speeds and they appear accurate, as well as humidity etc. The sun is rising later in the morning and setting earlier every day. Woe is me...woe are the bees. I still have six old hole filled hives to deal with.


There goes the neighborhood... 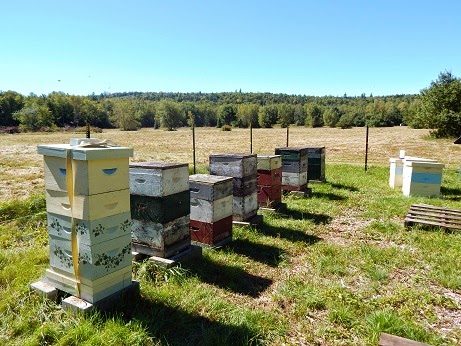 Posted by athenasbees at 8:53 AM No comments: